Higher Stamp Duty for all landlords

When George Osborne announced the increased stamp duty levels for additional properties in his Autumn Statement the consultation proposed a couple of exemptions for large scale investors:
· Those buying more than 15 properties in a single transaction and/or
· Those with an existing portfolio of 15 properties or more

Now the details have been confirmed and the government has decided to scrap that exemption altogether: all landlords, no matter how big, will pay the 3% Stamp Duty surcharge from 1st April.

However there’s better news for people caught in the stamp duty trap by circumstance, such as ill health or divorce hampering the sale of their existing home. The original proposal allowed a refund of the surcharge if the property were sold within 18 months, but in the final rules this has been extended to three years, in recognition that some of the issues can take a long time to resolve.

Of course that doesn’t overcome the need to find the extra 3% in the first place – potentially at very short notice.

Other refinements include an exemption for couples who’ve separated in a way that is “likely to become permanent”, so that each can own their own home without penalty (presumably with some measures to prevent abuse), and for those who’ve inherited a share of a property up to three years before the relevant transaction. Those will no doubt prove welcome relief against unintended consequences.

So now, fringe issues aside, we can all follow a simple flowchart, courtesy of HM Govt 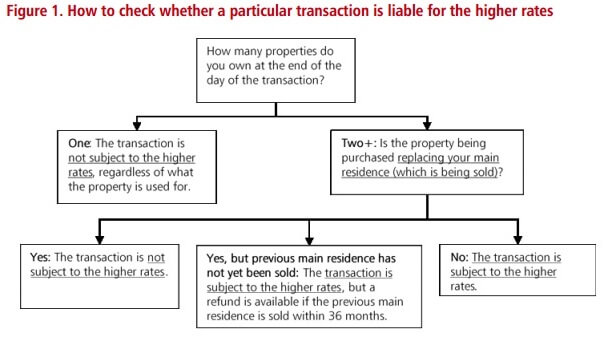